August 23, 2019
Before we begin, take a moment and read the number sentence below out loud. Don't think about it too much, just read it as you normally would to a class or colleague.

This past year, I have been doing more work in looking at how aspects of literacy creep into (and affect) how we teach and learn math. One theme that reoccured in different contexts was language, and paying close attention to what we say when we are teaching math.

Over time, many of us adopt "shortcuts" when it comes to talking about the symbolic representation of mathematics. We may know what we mean to say, but for students who struggle, the meanings of these shortcuts are not always apparent, and might even cause confusion.

The following are three very small, deliberate changes in language I am trying to work into my practice moving forward. Though each is a simple change, I'm having a hard time undoing decades of bad habits!

Based on some of our work on equivalence this past year with grade 7-9 students (which was based on the work of Carpenter et al. (2003)), we saw that many students have started equating (to pardon the pun) the equals sign with "find the answer;" it's what you hit on the calculator in order to give you the solution. For many, it no longer represents a balance or equivalence to be maintained.

As a result, with some classes we worked this past year, up to half of the students placed the number "12" in the box below, thinking that "the answer goes after the equals sign:"

To counter this, and to reinforce the idea of balance in an equation, I am trying to stop saying "equals" when reading a number sentence.

Mike Jacobs (@msbjacobs) presented a fascinating talk at OAME2019 this past spring, which in part spoke to how students' trouble with counting can impact much higher mathematical function. On one diagnostic, it was interesting to see some grade 9 students incorrectly continue a series as follows:

Mike posits that one possible reason for this is that we, as adults, have become so accustomed to pronouncing the number 401 as "four-oh-one." For a student who struggles with sense of number and counting, it might make sense that a four-oh-nine would be followed by a four-oh-ten.

Even though we as teachers know what we mean by the "oh," many of us have come to assume that all students know what we mean as well. Students have become good at hiding what they don't understand. By using the right language, we can not only help struggling students, but also reinforce good habits in their language.

At a NOMA fractions workshop by Tara Flynn (@taracflynn) and Shelley Yearley (@ShelleyYearley) earlier this year, I remember Shelley relating to the group: 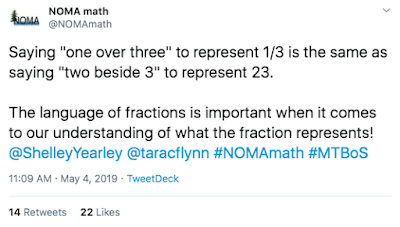 SO many students struggle with what a fraction represents, and how to visualize a fraction, that we do them a huge disservice by just reading a fraction as separate and individual numbers. Just as "two beside three" obliterates the meaning of two tens and three ones, "one over three" removes all meaning of one third.

Instead of reading 3/5 as "three over five," say "three fifths" or, even better, "three one-fifths."

How did you read this number sentence at the beginning of the post? Did you say "equals," "oh," or "over?" What other language shortcuts do we often fall into?
diagnostic Fractions goals Language learning Literacy Mathematics professional development Students Teachers teaching Twitter

Popular posts from this blog

July 15, 2020
When this resource was posted to Twitter a few weeks ago, it was shared quite a bit, so perhaps it needed a "home." Thank you to those of you who have shared stories and profiles of people who were not initially on this list - they have since been added. If students are to be successful in learning and exploring math, they need to believe in their intrinsic ability to think mathematically, an ability we ALL have. Part of this self-confidence develops (or is reinforced) when students can "see themselves" in others who have made great strides in maths and sciences, or who have made impactful contributions to their field. For many reasons, Indigenous learners are not often able to see themselves in that light in math and science. The following is the beginning of a list of Indigenous role models in mathematics and science, along with images and links to learn more about them and their work. The emphasis is on those residing/studying in Canada, however the list is
Read more

The Art of Questioning on Math Assessments

Last year, I had a great conversation with a colleague around math assessment. We were talking primarily about how to best triangulate products, observations, and conversations to form an overall balanced assessment of student learning, but a side conversation has really stuck with me. She told me that on her math tests, for any given learning goal, she gives the students four levels of questions to choose from. The students can then decide how to best demonstrate their understanding of that expectation. I love the idea of student voice and student choice in how learning is demonstrated. But it's taken me about a year to really wrap my head around this idea, and to start working with teachers in my board to try it out. Traditionally... Traditionally, on a test, I might ask students three or four questions all on the same expectation. It might look something like this: Like most teachers, I started with an easy problem, and each subsequent problem gets a little more invo
Read more

When a Drawing is Not Just a Drawing 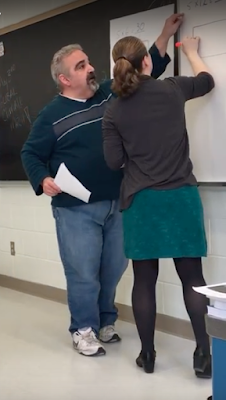 One of my biggest learnings in my role as a board co-ordinator has been around mental math in elementary schools. To be honest, when I first heard the term, I assumed mental math had to do with memorization and just learning multiplication facts.  I now know it to be a procedure very rich in strategy, promoting flexibility of number, and the very important mathematical process  of representing  a problem. Being able to see the math not only contributes to the understanding of the question at hand, but also to assessing the reasonableness of the answer. Visualization and representation of mathematics does not come easily to me - I was the student who became good at math by memorizing procedures. I still have to put a lot of effort into picturing multiplication in an array or area model, or picturing factorization by splitting items into groups, or picturing what happens to fractions as they are operated upon. This past week, I had the opportunity to model the annotation process i
Read more